The West Virginia State Fair 2013 festival is a great event held in Fairlea August 9 to 17 this year and will be sure to bring out the best of what WV has to offer.  One of the top festivals in the nation.  Don’t miss it this year!

Location of the State Fair:

Concerts and events at the West Virginia State Fair 2013 festival 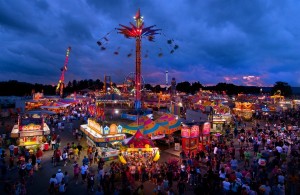 Theory of A Deadman
Show starts at 8pm
Saturday – Aug 17

The State Fair of West Virginia is an annual state fair for West Virginia. It is held annually in mid-August on the State Fairgrounds in Fairlea, near Lewisburg, West Virginia in the southeastern part of the state. The State Fairgrounds consists of a large open field for carnivals and exhibitions, a horse track, grandstands, and several exhibition buildings. Free parking is provided adjacent to the fairgrounds and, until 2006, free camping was also available in a large field with running-water toilets and showers, but no hookups. Campers are now charged a small fee.
The first event to be called the State Fair occurred in Wheeling on February 1, 1881. The Lewisburg fair evolved from local events that date back to 1854. In 1941 the state government declared it to be the official State Fair. However, World War II forced cancellation of the event until 1946. The Meadow River Lumber Building was listed on the National Register of Historic Places in 1997.

By the standards of large states with a more agricultural economies, the West Virginia event is relatively small. It lasts over eight days. It features a traveling carnival with various rides, competitive exhibitions by farmers and 4-H and FFA members, harness racing (no gambling is currently allowed), exhibitions by manufacturers of farm machinery and industrial tools, and a nightly concert performed by popular artists. Higher stakes Bingo is conducted at the fair than is normally permitted under state law. A beauty queen is selected. In political years, elaborate displays by candidates and political parties are also a part of the fair. Midway Rides are provided by the Orange unit of Reithoffer Shows.
The 2006 fair generated 174,438 paid admissions, which was the highest number since 2002. Adding children under five (who are admitted free) and various other complementary admissions brings the estimated attendance to 210,000.  Prior to the completion of Interstate 64 in 1988 the fairground was difficult to access from most of the state and the event was much more local in nature. However, it has grown greatly since that time.
The Fair is a non-profit organization under section 501(c)(3) of the U.S. Internal Revenue Code.  Although the Fair does not release its financial statements to the public, managers claim that it operates on a “small margin.” According to a 2006 report commissioned by the Fair, it has an annual economic impact of $8.9 million on Greenbrier County.
The Fair receives no appropriation from the state, supporting itself from admissions, fees charged to vendors, and rental of the fairgrounds to other groups. It does receive support in kind from the state Department of Agriculture and from West Virginia University.