North Dakota State Fair 2013 festival is held annually in Minot and the 2013 line up will be unbeatable.  Look forward to this years events to break all attendance records!

History of the State Fair of North Dakota

The North Dakota State Fair is an annual state fair held each July in Minot, North Dakota. The fair features carnival rides, agricultural expositions, government and commercial exhibitions, and a variety of musical and performance entertainment.
The Fairgrounds are located along Burdick Expressway in east Minot. The facilities on the site are used for a variety of other events; the grandstand is regularly used for Nodak Speedway stock car races, and the All Seasons Arena is frequently used for conventions, sporting events, and festivals, including Norsk Høstfest.
The fair was first held in Minot in 1922 but was not officially sanctioned by the state government until 1966. The North Dakota State Fair is the largest event in the state, drawing around 250,000 people. 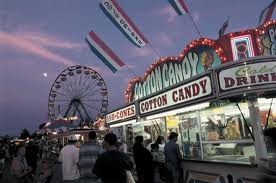 Attendance increased every year from 2000 to 2005. In 2009, the fair has set a record with the attendance of 296,919. The 2010 fair increased its record to over 308,000.
On July 10, 2011 it was announced that the 2011 fair would be cancelled due to the historic 2011 Souris River flood a month before that left much of the grounds underwater. This announcement came after originally planning to hold the fair sans competitive events.