The Michigan State Fair 2013 festival is sure to be one of the events in the mitten state not to miss with expected attendance for the Novi Michigan event over 50,000 strong for this years great line up.

Location of the State Fair of Michigan 2013 festival 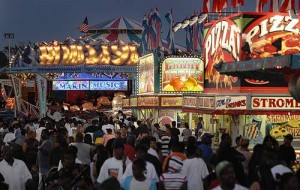 History of the Michigan State Fair:

In 1904, Joseph L. Hudson, together with three of his associates, decided to give the State Fair its permanent home. They formed the State Fair Land Company, which acquired 135 acres (0.55 km2) between 7½ and 8 Mile Roads, east of Woodward Avenue. Because Hudson had no interest in running the fair, he sold the land to the Michigan State Agricultural Society for one dollar on April 18, 1905. The Agricultural Society accepted the land then purchased an additional 32 acres (130,000 m2), extending the fairgrounds to 167 acres (0.68 km2). Throughout the following years, additional land was purchased and sold. The present size of the fairgrounds is 164 acres (0.66 km2).

Michigan State Fairgrounds Coliseum, also known as the Hockeytown State Fair Coliseum, is a 5,600-seat multi-purpose arena located on the fairgrounds. Two NASCAR races were held at a one-mile track at the fairgrounds. Tommy Thompson won the 1951 event and Tim Flock won in 1952.[1]  On April 9, 2012, Governor Rick Snyder signed Senate Bill 515 and House Bill 4803, which would authorize the transfer of the fairgrounds land to the Land Bank Fast Track Authority, which would oversee the land for future development, including plans for a station for the proposed commuter rail service. [6][7]

The Great Lakes State Fair is a not-for-profit organization committed to excellence in providing opportunities for development and promotion of agriculture, education,industry and family entertainment while preserving our Michigan Heritage.In 2011 Great Lakes Agricultural Fair, a 501 C (3) organization, was created to provide a resurgence and rising of an agricultural event that had historically provided a rich a meaningful venue for the State of Michigan. The agricultural industry is our state’s second leading economic industry. An event to celebrate the traditions of the past and the agricultural technology of the future has been reborn.

The Great Lakes State Fair will enhance the “Quality of Life” for all citizens throughout Michigan and will offer a wide venue of activities to meet and exceed expectations. The fair is being built upon the root-strength and tradition of our previous state fairs and will become a showcase for so many assets of Michigan.

The Great Lakes State Fair will take place August 31 through September 3, 2012 at the Suburban Collection Showplace in the Detroit suburb of Novi. [8][9]

2 Responses to "Michigan State Fair 2013 festival will be huge!"