The Maryland State Fair 2013 festival in Lutherville Timonium, MD will be held Aug 23 to Sept 2, 2013 and expects over 410,000+ for the festivities this year.  Expect a great show with lots of events to show what Maryland has to offer!

Location of the State Fair of Maryland 2013 festival

The Maryland State Fairgrounds is located near the intersection of York and Timonium Roads, Timonium, Maryland Vehicle access gates are located on York Road between Padonia and Timonium Roads and on Timonium Road about a quarter mile east of I83 and just past the Light Rail tracks.  Vehicles can enter using either of these gates without restrictions at Fairground events during most of the year.

History of the State Fair of Maryland

The first Maryland State Fair festival was held in 1878 and was known as the Lutherville Fair. The following year, 1879, the fair was moved to its current location in Timonium and was held from September 9 through September 12. In 1906, the Lutherville Fair merged with the Pimlico Fair and became known as the Maryland State Fair. The fair was suspended from 1943 through 1945 during World War II. In 1999, the fair grew to its current length of 11 days.[1]

In 1878, after several unsuccessful attempts to establish an on-going fair at other locations around Baltimore, a group of Maryland businessmen operated a successful fair on a 4-acre (16,000 m2) site in Lutherville, Maryland. Despite its success, the Lutherville Fair was short-lived because an extension of the Northern Central Railway was constructed in the middle of the fairgrounds.

Their success in Lutherville, however, gave the operators resolve to establish an annual fair, and in December 1878, they incorporated as the Agricultural Society of Baltimore County. The corporation leased a 37-acre (150,000 m2) plot of land on the York Turnpike on what was then known as “the Timonium Estate.” The first Fair at its new home was held September 9–12, 1879. The Northern Central Railway, cause of the closing of the Lutherville Fair, was now the primary source of transportation for fairgoers from Baltimore to the Timonium Fairgrounds during the rest of the century. Other fairgoers walked or rode horses, wagons, carriages, and carts to the fairgrounds using the Turnpike.

Late in the century, The Agricultural Society of Baltimore County faced stiff competition from the Pimlico Fair, also referred to as the State Fair. Ultimately, the two groups held joint fairs in 1894 and 1897, and in 1906, merged to form one corporation – the Maryland State Fair and Agricultural Society of Baltimore County, Md. Their annual Fair became known as The Maryland State Fair.

The early years at the Fair saw tents and wooden structures in use to exhibit home arts, farm and garden products, and livestock shows. Plowing and working oxen competitions were some of the popular but few attractions. Races were held at the track, and results were forwarded to interested horsemen at Baltimore and Alexandria, VA, by way of carrier pigeon. Food concessions consisted of sandwiches made by the farmers’ wives, and amusements involved sideshows, sack races, and greased pole climbing.

The Maryland State Fair festival grew and prospered, adding many attractions and exhibits, including an airmail delivery at the 1918 Fair. The annual event continued until 1943 when the Fair was interrupted because of the war effort. The fairgrounds were leased to the U.S. Army for a storage depot and a vehicle repair center. After a three year suspension, the Fair reopened its gates in 1946. 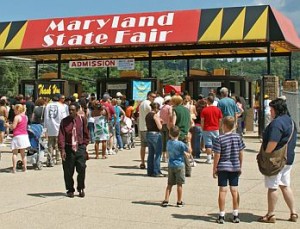 Don’t miss the Maryland State Fair 2013 festival this year, it is show to blow you away with great concerts and events! MD pride!

One Response to "Maryland State Fair in Lutherville Timonium MD will be huge!"