The Eastern Idaho State Fair 2015 festival is held in Blackfoot, ID each year with expected attendance of over 210,000 for the August 31-September 7th events and concerts. 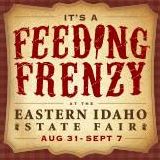 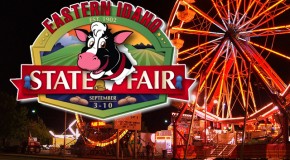 From its early origins as a livestock show in 1902, the Eastern Idaho State Fair has become a favorite annual destination for families young and old, creating fond memories and unforgettable experiences.

For more than a century, the Eastern Idaho State Fair festival has upheld its mission to provide wholesome, affordable, family-oriented entertainment and education in an agricultural environment within clean and safe surroundings.

Agriculture has always been the backbone of the Eastern Idaho State Fair. Over the course of eight days, the Fair is home to more than 2,000 animals including dairy and beef cattle, light and draft horses, sheep, pigs, goats, chickens, rabbits, pigeons, and occasionally ostriches, llamas, and emus. The Fair receives more than 6,000 entries from Idahoans young and old entering their hobbies and livestock in 26 competition categories. This includes Livestock, Flowers, Baking, Canning, Needlecraft, Antiques, Fine Arts, Hobbies & Craft, Photography, Native American, FFA, and 4-H.

Nearly 100 vendors feed hungry visitors with favorites such as corn dogs, giant turkey legs, funnel cakes and tiger ears. More than 201 vendors showcase their services throughout the grounds. For the last several years, attendance has reached an all-time record of roughly 220,000 visitors.

The Fair traces its history back to 1902, when a group of cattlemen wanted to hold a livestock show in Blackfoot. They got together to purchase some land, and the show was held. The Pocatello Tribune came to the show and reported on October 9, 1902: “This is a great day in the history of Blackfoot. There were Cattle to look at as well as floral and agricultural exhibits.”

For the next 16 years, the Southeastern Idaho Fair ran continuously, where the first merry-go-round powered by a stream engine arrived in 1906, followed by the Fair board spending $900 in 1912 to have Teddy Roosevelt arrive by train to make a campaign speech. In 1918, financial hardship forced the Fair to shut down.

Challenged the Utah fair by changing its name to Eastern Idaho State Fair.

In the late 1930s, the Eastern Idaho Fair District overcame a big challenge when the Utah State Fair changed its dates to coincide with the Blackfoot event. The Fair board refused to move its dates and challenged the Utah fair for livestock and entertainment by changing its name to the Eastern Idaho State Fair. By this time, 12 counties were part of the Fair district, bringing an annual attendance of 40,000 visitors. Significant construction projects included the Grandstands, and the Arts & Crafts department was established, bringing more variety to the event. Contests were created, including a Potato Picking Contest in 1939 where the governors from Idaho and Maine competed. (Maine won.)

In 1940, the Fair built its landmark arch, along with administrative offices. Its attendance of 66,000 plus 25,000 student admissions over six nights and five days broke all records of past years. Two years later, the United States entered World War II, leading the Fair to shut down operations in an effort to help the American war effort. Fair officials rented out their building to further assist the county through the storage of surplus foodstuffs. Also in 1942, fire destroyed the commercial building which contained a potato dehydration plant, consuming 250,000 pounds of potatoes, 50 tons of coal and all equipment inside. It took over ten years before the structure could be rebuilt.

The Eastern Idaho State Fair resumed operations in 1944; it has continuously been held ever since.

On September 22, 1944, less than one week after the 1944 Fair had ended, the U.S. Army set up headquarters at the fairgrounds to guard and manage 500 Italian prisoners of war for over a month. In what was called the “acute harvest labor crisis in the country,” the Italian POWs dug sugar beets and potatoes during their stay in southeast Idaho. This event brought the reality of war and its effects directly to the people of this area.

The Board pulled the plug on betting.

After World War II, the Fair met new challenges. First-day attendance (15,000) was up 50% from previous years, as new entertainment – including grandstand entertainment, aerial acrobats, a Disappearing Water Ballet and Pete Siebrand’s Carnival – drew crowds to the Fair. In 1948, attendance soared to over 82,000, and housing in Blackfoot for Fair attendees became a serious problem. Several grounds improvements were made during this time, including a new Midway area on the west side, a new steel exhibit building, four new livestock barns and 50 new stalls for race horses. From 1946-1948, the Fair first offered betting on horse racing, but after two years, the Board pulled the plug on betting. For years, they fought to get horse racing legislation passed, despite vetoes from the Governor of Idaho. Eventually, it would pass.

The latter half of the 20th century continued to bring innovation and growth to the Eastern Idaho State Fair. The horse racing legislation finally passed, and pari-mutuel racing started in 1964. That same year, however, the new pari-mutuel racing commission and the Fair Board canceled the Indian Relay races, an event run by Native Americans from the Fort Hall Reservation that has been popular and a mainstay since the Fair’s early years. This decision immediately spawned criticism from individuals who called the competition “the most popular part of the racing program.” The racing commission fine-tuned its schedule and the Indian Relay race returned in 1965; since then, the Indian Relays have run consistently during the horse races and continues to draw large crowds to the grandstand on the days the races are held.

In 1968, KIFI-TV chose the Eastern Idaho State Fair as the site for its very first LIVE broadcast, which featured weatherman Lloyd Lindsey Young.

The 1970s and 1980s ushered in significant enhancements to the grounds, including a new 4-H building, the $500,000 Goddard Livestock Pavilion and a new Hobbies & Crafts building. The Fair began operating under annual themes beginning with the 1972 theme, “Six Big Days and Nights, Spectacular Fun for Everyone!” In 1974, the Demolition Derby was introduced and became a Fair tradition benefiting the Blackfoot Elks Club; since then, it has become a Closing Night favorite. Fair attendance continued to rise; by the mid-1980s, the Fair was seeing 50,000 people on opening day, and totaling nearly 220,000. By 1989, the Fair had extended to an eight-day event which continues to the present.

In the 1990s, the Eastern Idaho State Fair festival brought in new contests – including the State Arm Wrestling Championships, Crisco cooking contests, Karaoke, the annual High Desert Homebrew Competition, and others – to add to its entertainment. Butler Amusements began providing the Carnival; with over 30 rides and numerous game booths, they have maintained a solid relationship since with the Eastern Idaho State Fair. The Fair established a permanent stage for its nighttime entertainment, which during this time featured music legends Charlie Daniels and Travis Tritt.

Now into the 21st Century, the Eastern Idaho State Fair festival continues to be eastern Idaho’s longest running annual event. In 2009, the Fair set an all-time attendance record of 221,000 visitors. The Fair also has used technology to better connect and communicate with its audiences, through this website– as well as through social media sites including Twitter and Facebook. In 2010, the Fair improved its online ticket ordering process, making it more convenient for fairgoers to buy their tickets ahead of time, saving them from waiting in lines to purchase or pick up will-call tickets. Also that year, the Fair Board strengthened the Eastern Idaho State Fair festival’s smoking policy, whereby most of the Fair is now smoke-free, with the exception of two designated smoking areas. This creates a healthier environment for the Fair’s visitors, workers and animals who participate in this annual family tradition year after year.

The Eastern Idaho State Fair festival lends its success to the people of Eastern Idaho, who continue to visit the Fair year after year. Its dedicated Board members, Commissioners, leadership and staff have dedicated countless hours through the years to bring this annual event to Blackfoot. Sponsors and area organizations have also lent generous support. There have been some hardships along the way, but supporters have seen the Fair’s meaning and value to the people of Idaho and have ensured the Fair’s continued presence.

The Eastern Idaho State Fair festival anticipates more success in the next 110 years!

The dates of the State Fair of Idaho is typically held in late August early September and is one of the best state fairs in the nation! This year the state fair will be held August 30 – September 6, 2014.

Here are some updates and top 10 things to know about the official state fair.

Location and directions to the ID State Fair

Here’s the official address for the ID State Fair for 2014.

If you’re thinking of staying in BlackfootIdaho then here’s some information you’d want to know about the Idaho State Fair.

History of the State Fair of Idaho

Paragraph on the history – When you visit the ID State Fair you can expect to find a whole world of livestock animals, horse shows, competitive exhibits, entertainment, ag education, concerts and carnival rides galore!! We’re thrilled to offer you a wide variety of attractions and are sure that there is something for everyone in your family to enjoy.
2014 Information Coming Soon!

Past acts at the Idaho State Fair

Here are some of the hit performances and bands that showed up for the ID State Fair.